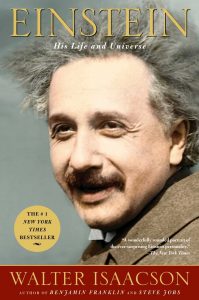 Ready to learn the most important takeaways from Einstein in less than two minutes? Keep reading!

Walter Isaacson’s acclaimed biography, the first since all of Einstein’s papers became available, examines the events and experiences that shaped and inspired Einstein’s extraordinary career.